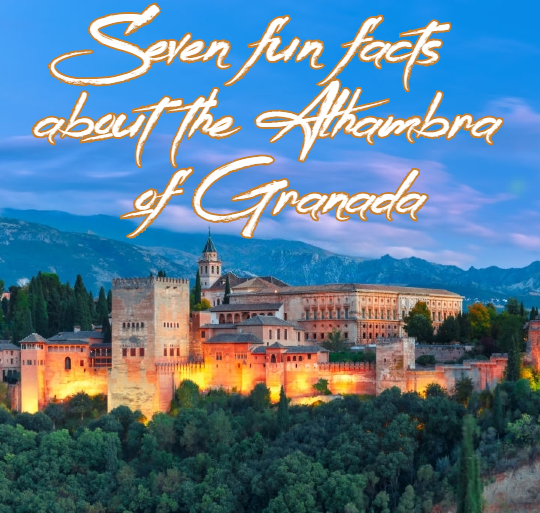 If you’re a curious traveler, you may be looking for interesting places to visit on your next adventure. The south of Spain has many treasures, but the crown jewel of the region is definitely the Alhambra Palace of Granada. Its amazing location, architecture, history and legends, will make you want to visit more than once. Here are 7 fun facts about the Alhambra, you need to know, before you go!

The name Alhambra comes from the Arabic word al-Ḥamrāʼ, which means “the red one”, but what does this refer to? Well, the strongest theory alludes to the color of the fortress, which in Arabic is al-Qal’at al-Ḥamrāʼ, and it was probably shortened through time, in Andalusia we do that a lot!

We are used to call it “the Alhambra Palace”, but this place is actually a whole citadel within the city of Granada. It has a complex of different palaces, gardens, passageways, and a fortress. It was the home of the Sultan and his family, but it was also home to the court, and many workers. The Alhambra is the only Muslim citadel that is still standing almost as perfectly as it was since the beginning.

When we say Muslim architects were geniuses, we are not joking! They used antiseismic structures in many of their buildings, as they knew the region was a seismic area. The Alhambra is no exception. The citadel has survived many earthquakes for almost 800 years. They used lead foils in between the columns and the foundations, so whenever there’s a seism, the buildings follow the movement without collapsing.

4. The walls can talk

Well, it’s not like they’re really going to speak to you, but the walls of the Alhambra do have words carved all over them. The inscriptions are a type of decoration that describe poems and parts of the Quran. Isn’t it amazing how the Alhambra has lived more time listening to Arabic, than it has to Spanish? For almost 800 years, this building witnessed power and love stories from the Muslim sultans; but it has only witnessed Spanish passion for a little over 500 years. Don’t worry if you don’t know a word of Arabic, the Alhambra expert guides will explain you the beauty of these phrases.

One of the most intersting fun facts about the Alhambra, is that besides being a giant book, it can also tell you what the time is! Yes, the genius architects strike back with another amazing feature, the entire citadel is perfectly aligned to work as a massive sundial. At noon, half of the rooms will have shade, and the other half sunlight. Choose your visit time wisely!

6. The chamber of secrets

No, we are not talking about Harry Potter. The Alhambra does in fact have its own “Chamber of Secrets”, also known as the whispering gallery. This name comes from the effect that, yet another architectonic feature, creates in the place. The curvature of the ceiling, makes the sounds travel from one corner to the opposite one, so be careful and don’t share any important information while you’re there!

7. Math is the answer

Something that any architecture and history lover can realize as soon as they step a foot in the Alhambra, is the math precision as the main element. The beauty that you will see in this place can only come from the perfect engineering and geometry in the structures and decoration tiles. However, the original Muslim architects are said to have left unnoticeable imperfections in the tiles, as they used to say only God can do perfect. Do you dare to find any?

All these fun facts of the Alhambra are what makes it unique. This is why it was declared a UNESCO World Heritage Site in 1984. If you want to live the experience of visiting this amazing place, don’t hesitate and choose one of our tours!

One thought on “7 Fun facts about the Alhambra of Granada”