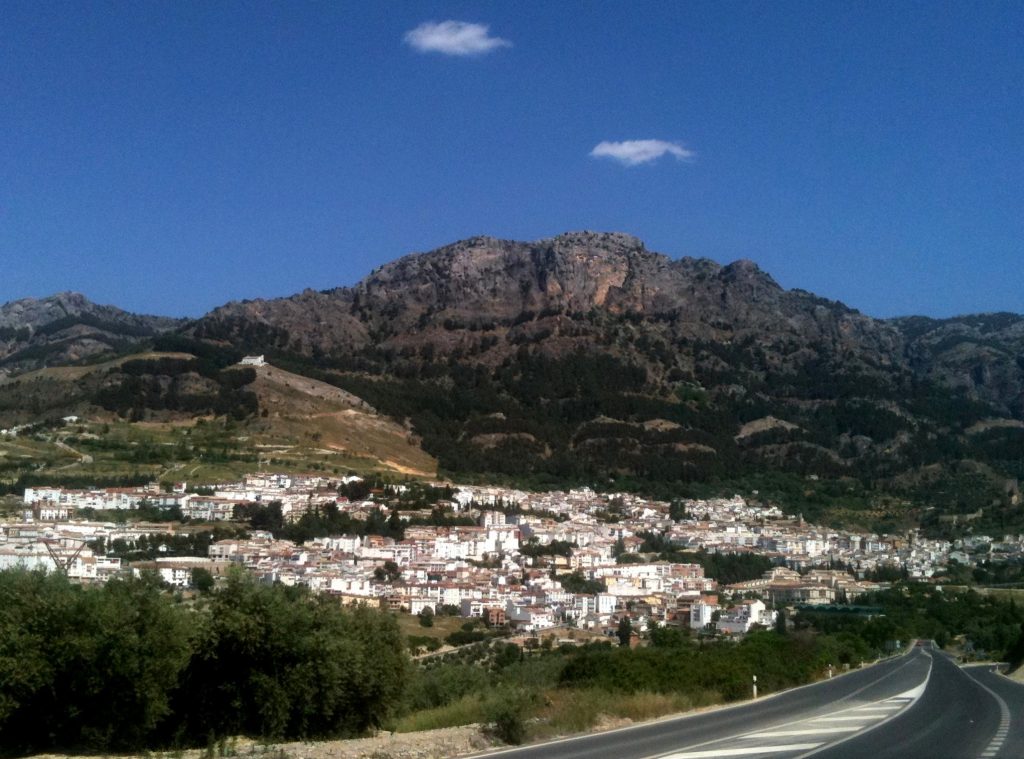 Imagine riding through thousands of hectares of olive groves –a modest number of 550,000 hectares which makes up 25% of all the olive groves in Spain-, up, down, right, left, soft curves or here you go sharp curves, and then all of a sudden your eyes stop at the mighty sight of the mountains that surround Cazorla Natural Park as if it was a man made castle waiting there to be conquered. A challenge to the eyes, a thrill for the soul. We were going to the rider´s get together in Cazorla organized by the GStrail forum. Hardly any other place could beat this choice as we had a fine selection of impressive and alpine-like landscape, Andalusian olive groves, large extensions of dark green pine trees, narrow roads with a good number of hairpin curves, refreshing rivers, a post card-blue lake as the center piece of the park, upbeat mood and the readiness to ride and have a good time. Waht else could I ask for? The full moon maybe? It was there too! Despite having the bike for already a year and having ridden in Africa we didn´t not know any other bikers nor did we know much about riding at all so that this meeting was for us the perfect jumping board into the rider’s world. And we were not disappointed as each single rider there had stories to tell, even female tales as there were even female riders there! I could not believe my eyes. After covering 18000 km in Africa spotting only 1 female rider it was a spiritual blessing for me to meet girls taming heavy machines -read BMWs- and riding them as if there were light bicycles. Cazorla together with Segura and las Villas is the largest protected area in Spain. It´s importance comes partially from the fact that 2 major rivers, river Segura and river Guadalquivir initiate their long journey towards the Mediterranean sea and the Atlantic ocean here. I f you have heard of America maybe you should also learn about the river Guadalquivir as it was here where Christophe Columbus started his journey!

It was a 2 wheels friendly place but also overly ants friendly! On top it seems that the hotel feeds the wild boars –Call it tame boars- on a regular basis with the leftovers so that the wild boars were always hanging around in front of the hotel waiting impatiently for food. I could not help but think about accidents that could happen at any time with kids getting to close to the boars or boars getting to close to the kids. Fortunately and as it was expected none of the riders there were accompanied by the kids! Did I mention before that if was our first official appearance in the motorcycling world? And it went all smooth. I guess there were around 50 riders coming from places as far as Barcelona or Vitoria- 800 km at least-, most of the bikes were BMW GS, for me gigantic bulls, all shiny and well-kept. Maybe too well-kept as there were hardly any signs of having being used ever. Comparing them to our bike covered with dirt and scratches, with broken indicators, worn out seat,… I could not stop asking myself whether we were such bad riders –no doubt- or do they ever use their bikes off road? There were also travel stories of raids mostly in Morocco: sand storms, unbearable heat, broken suspensions, moments of desperation where big boys would start to cry, … Rider´s tales livening up heavy dinners that we were having according to the Spanish tradition, that is around 22.30 pm! No matter how late the dinner was and how early the breakfast, the atmosphere was great and there was always the road to hit again and the pool to chill out.

2 thoughts on “ON TWO WHEELS AMONG THE OLIVES!”