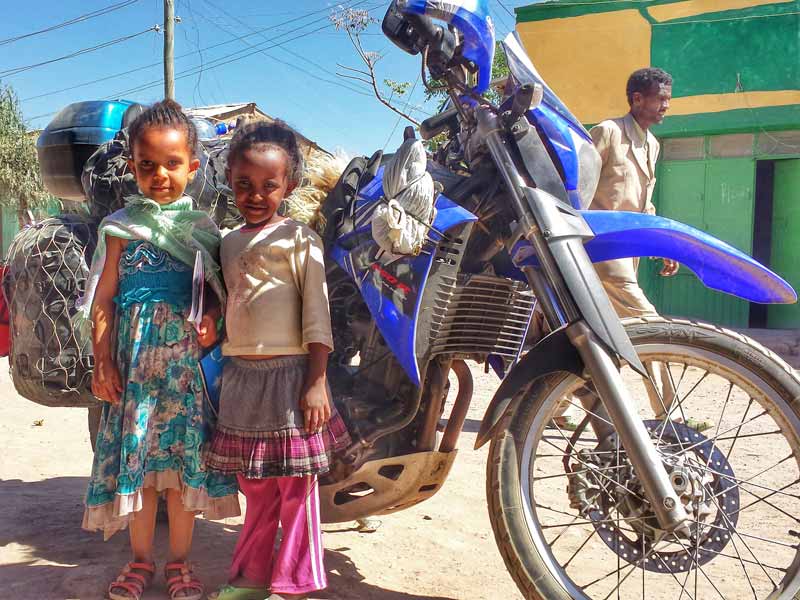 A few weeks passed and I still felt like lingering in the most relaxed town I’ve ever come across; Mekele, the second biggest city in Ethiopia with such a miniature size that you would not even realize that you are in a city. The entire town center is just a maze of small coffee houses. I was in the Tigray region apparently very different from the Amharic speaking Addis and center and with more tights to the neighboring Eritrea than to the south. It still amazes me that with all the linguistic and ethnic diversity that there is to be found in Ethiopia and being surrounded only by trouble countries how the country could keep its integrity.
I was savoring my daily coffee in the cobbled street of Mekele each day and meeting or making new friends when I received the news that to renew my one month visa there was only one way- to go back to Addis. 800 km or 2 days of ride. There came my salvation when I met a German development worker who told me that he had done on a motorcycle a beautiful dirt road from Mekele to Lalibela, the most famous attraction in Ethiopia, the equivalent of the pyramids to Egypt. I was hesitating to take that road as many other locals were warning me from taking it, too bad on a motorcycle and apparently it did not have much traffic so I was afraid that if anything happened to me there was nobody to lift up the bike. The German accuracy proved to be legendary again as he was right, the road was solitary, scenic and not bad at all. 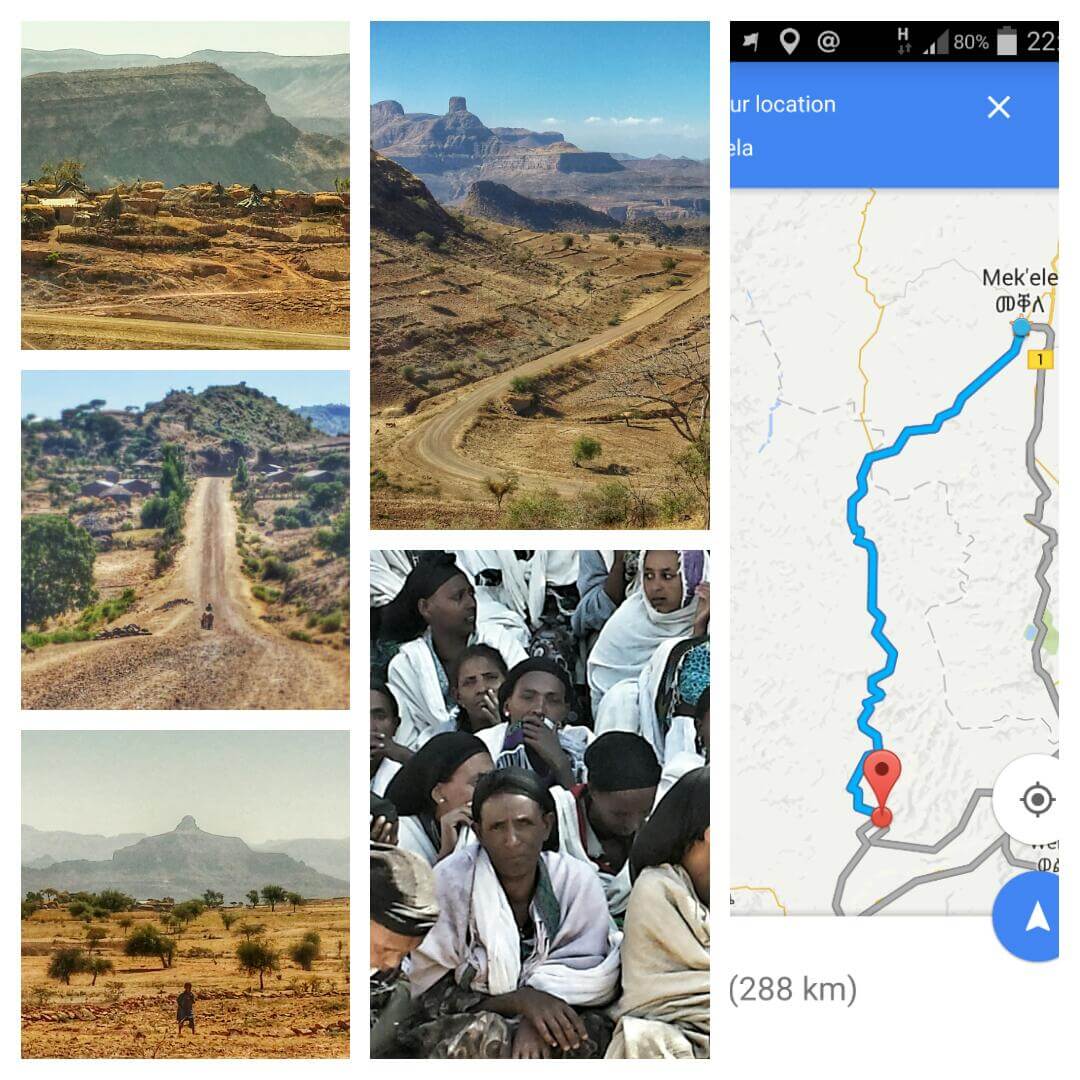 The laziness of taking the same road all the way down to Addis made me take the decision and I took the dirt road. The scenery was solitary just like the people who were living there. Rocky and kind of Gran Canyon style. The road itself was not that bad and again included a lot of going up and down the mountains. I shared my 2 days of ride with all those country people that were doing the same road on a daily basis and on foot, from one village on one side of the mountain up to the other and back. Hard life. Contrary to my idea that in theses remote ideas people will be welcoming and more genuine I didn’t feel that welcome. All the opposite I even felt a bit threatened in a couple of occasions. My arrival in many towns was not that well received. There were no smiles, no happy faces to wish me a safe ride. I would not call it hostility, maybe not being used to alien looking foreigners dressed in robotic fashion, helmet, lipsticks and an antenna like Gopro looking on top of the helmet. Or maybe they were just so battered by the hard life day after day that they didn’t have any energy or curiosity left to be interested at anything else. On one occasion I stopped to take a picture when I realized a huge group of kids running up hill to me. I could guess that it would bring me only trouble but still I decided to wait for them. I greeted the in English and immediately was asked about my name… the second question was not that much about me but about what they wanted from me: money, pen and more money. I kept on smiling in a friendly way but the little demons started touching around my luggage and trying to open my fanny pack. First I complained softly but then I noticed that they were becoming more persistent and violent. They were holding onto my handlebars, pushing me, trying to reach my jacket pocket. In the end some of them managed to open a little bag I had on top of the tank with a monopod to take better selfies and a few other essentials and run away. The other kids were asking me to go after them and talk to their parents as it was not right but at the same time they still were asking for money and trying to take out something from my luggage. At the end I stopped smiling, shouted loudly and rode away. Never ever again I stopped at a village with no parents at sight!

My ride through this surreal landscape, barren and  red landscape as if a heavy read filter was  applied took me 2 days till I reached Lalibela. As many other tourist attractions it was just an expensive disappointment. With a lot of rock hewn churches and its setting on top of the mountains it had all what a charming town could have,  but the priests having the custody of the churches decided to charge 50 dollars and don’t put any infrastructures. The guides and the town people frustrated by the fact that they will never see a cent of the money from the church started hassling visitors in every possible way. It was an open air museum of scammers, hasslers, bored kids that wanted to have some fun and improve their English, people with no hope and no future asking you if you like their city, Lalibela. The answer was no! How could I like a town, where it’s main reason de etre is not spectacular anymore as the churches are covered by monstrous structors to avoid the erosion. To me there was no room any more left for the imagination and on top a litter of gas for a frengis (foreigner) like me would have costed 50 birr, 2 €! 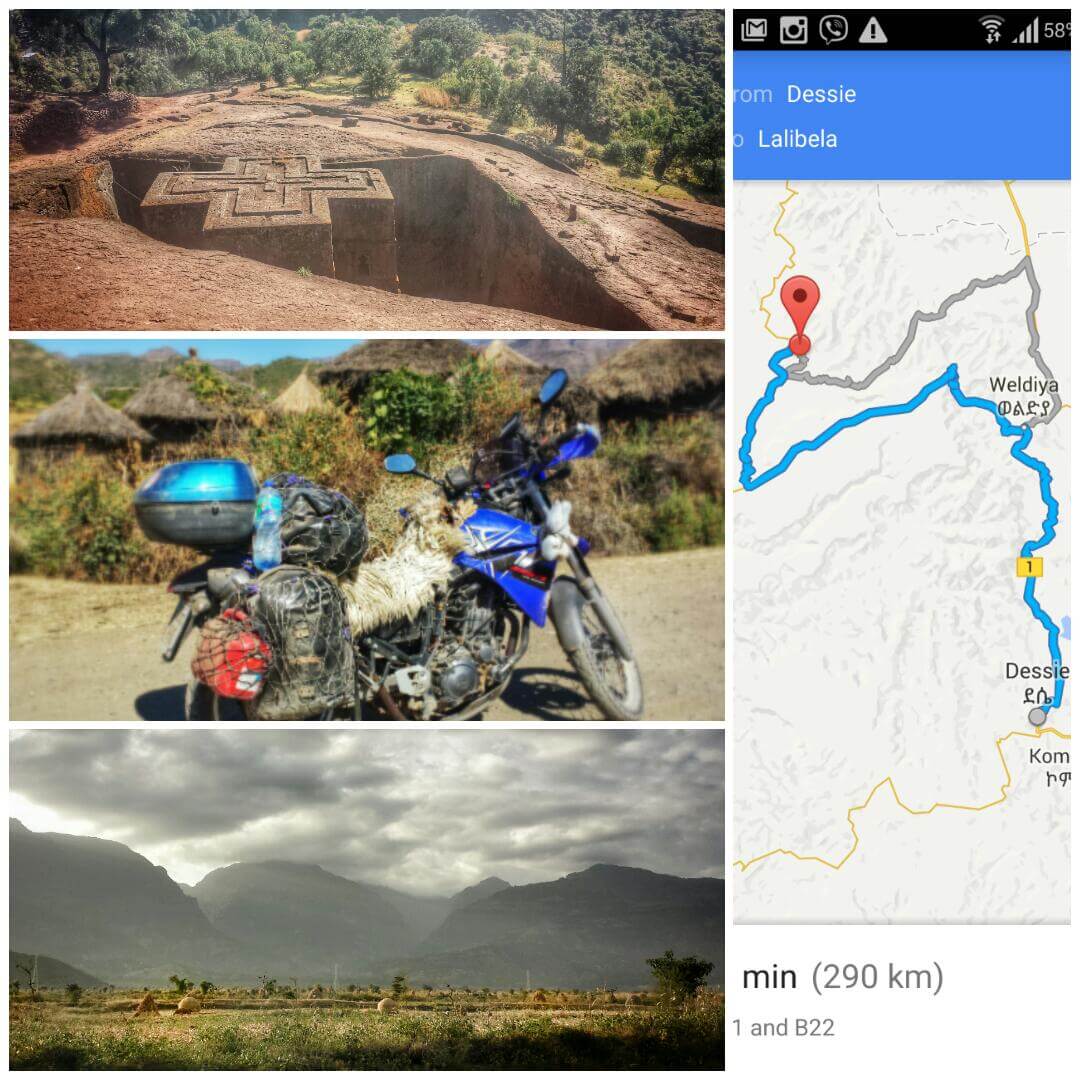 I was longing to leave the crown of the Ethiopian attractions, Lalibela, to me it was a tourist trap with not genuine people and 2 sets of prices one for foreigners and for the locals, the Chinese were at work constructing the road that connected Lalibela to the main road and it was just a dust-ridden town full of self appointed guides. Rumors had told me that the dirt road was in horrible conditions but there was no other way out of this unpleasant place. The road till the junction town of Ganesha was a gravel road and then a silky tarmac on a high plateau with quite fresh air. Then there was a spectacular mountain road down to Waldia where all of sudden every thing would go tropical with green banana leaves on both sides of the road. The only thing that remained the same was the shortage of gas in the gas stations: you need some gas you go to the black market!

2 thoughts on “Riding in Ethiopia #2”