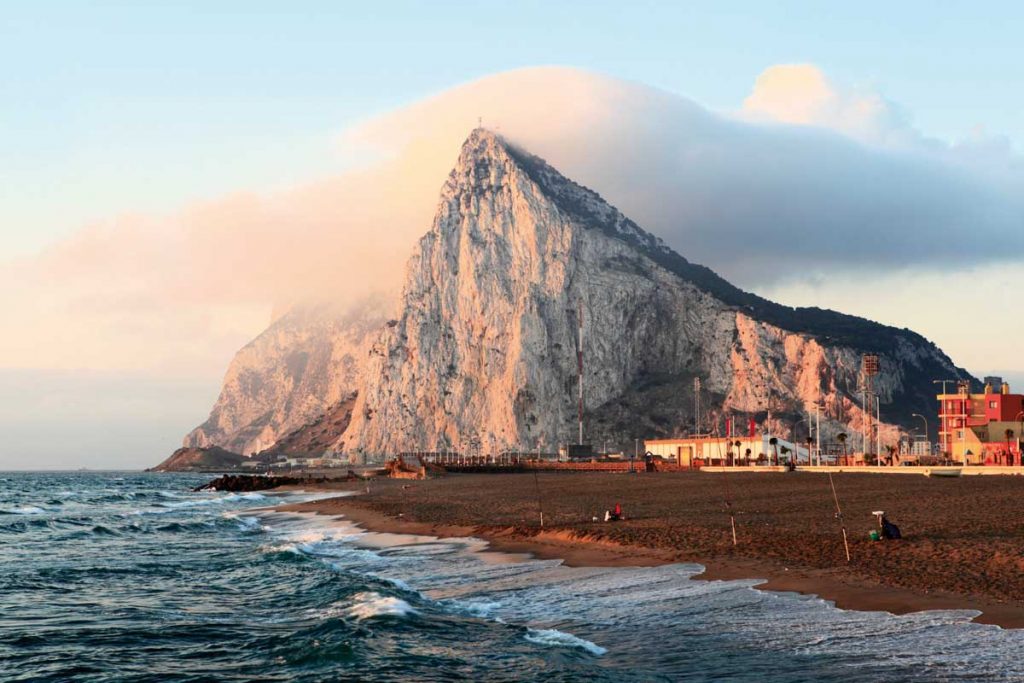 Gibraltar is a fascinating place. Although not even three square miles (less than seven square kilometres), it has a population of 32,000 people; this makes it the fifth most densely populated territory in the world. Further to this it has seen countless wars and skirmishes between nations trying to claim it for themselves. The majority of these battles have, of course, been between the British and Spanish, but it was the Moors who settled here first. The rock derives it’s name from Jabal Tariq, this is Arabic for Tariq’s Mountain, as it’s named after Tariq Ibn-Ziyad, the Moorish general who, in 711, led the initial occupation of the Iberian Peninsula. The great thing about Gibraltar is that it can easily be done in a day trip from Seville!! In fact, a Gibraltar day trip is just one of the many wonderful excursions we offer. 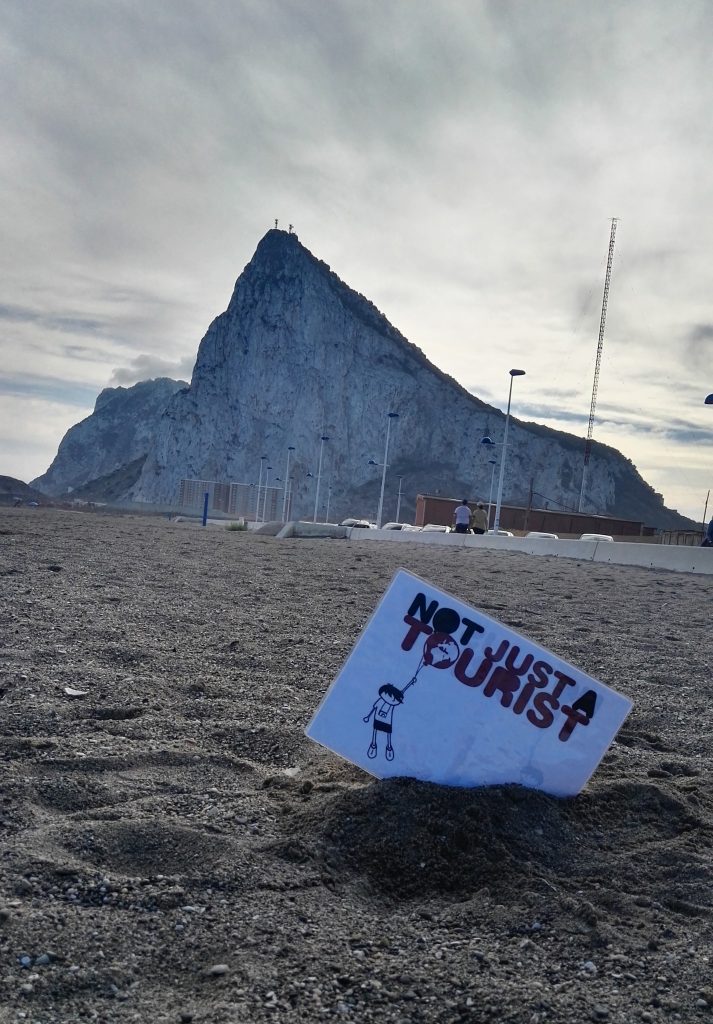 After a pleasant drive through beautiful countryside, the first glimpses of the famous rock are offered as we approach the town of Algeciras. The long spine of the 426 metre high rock almost looks like an apparition in the way it jumps out of the water, a giant green lump awkwardly protruding out of an otherwise flattened carpet of blue. It’s immediately obvious you are somewhere different when, after parking, you have to walk through customs. Don’t let this scare you, though; it might well be the easiest border crossing in the world!

The Gibraltar taxis are the only vehicles authorised to enter into the national park, so, upon entry into the territory, we hop straight into one. The surreal vein in which the trip has started continues here, as the only road from the border into Gibraltar rolls directly over the runway. Straight away this makes it obvious how much space is at a premium on the rock. But what isn’t immediately obvious is that everything you see to your right is reclaimed land: the cruise terminal, the high rise apartments, even half of the runway have been reclaimed from the sea. Due to the cost of reclaiming land, the runway is just as long as it needs to be to host commercial aircraft. The sea at either end, combined with the strong crosswinds (not to mention the mountain sitting ominously just next-door) have earned the title of fifth most extreme runway in the world. 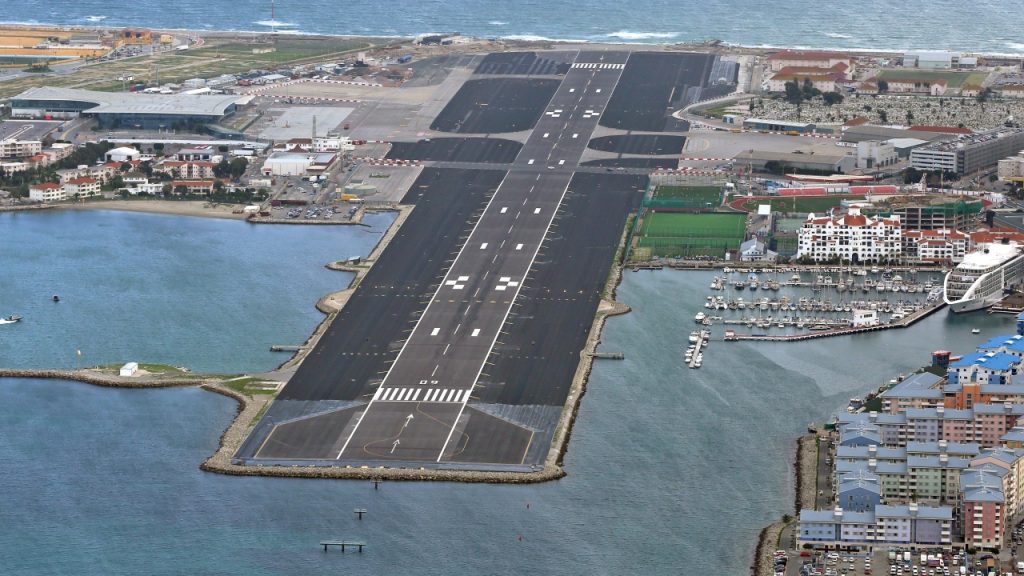 As the taxi circles the town, heading for the national park, we pass the Trafalgar Cemetery; so named because it was the burial place for sailors who died at the Battle of Trafalgar. Those who died at sea were buried there, but those who survived until landfall before passing on were buried in this serene garden. These two burials were for everyone, except Admiral Nelson. Although the revered sea captain died during the 1805 battle, he was considered too important for a sea burial. The curiosity of this story lies in how his body was transported from the waters just off of Cape Trafalgar. To prevent the decaying of the body before it could be buried in St Paul’s cathedral, he was transported to Gibraltar in a barrel of rum!

After passing the cemetery, the taxi begins to climb the rock, heading for the Upper Rock National Park. The first stop is the entrance to the park at the augustly named Pillars of Hercules. According to Greek mythology, Hercules had to perform 12 tasks in order to prove he was a God and be allowed up onto Mount Olympus. The one pertinent to Gibraltar is that he had to capture the cattle of Geryon, a hideous monster who lived on an Island in the west of the Mediterranean. It is said that when heading home, instead of walking around the Atlas Mountains, Hercules used his super human strength to punch straight through them. In doing this he created the straight of Gibraltar, and connected the Mediterranean with the Atlantic. The one mountain become two, Mons Albe in Africa, and Mons Calpe (Gibraltar) in Europe. These two mountains became known as the Pillars of Hercules. From this point on the rock it is easy to sea Morocco sitting a short swim across the straight. 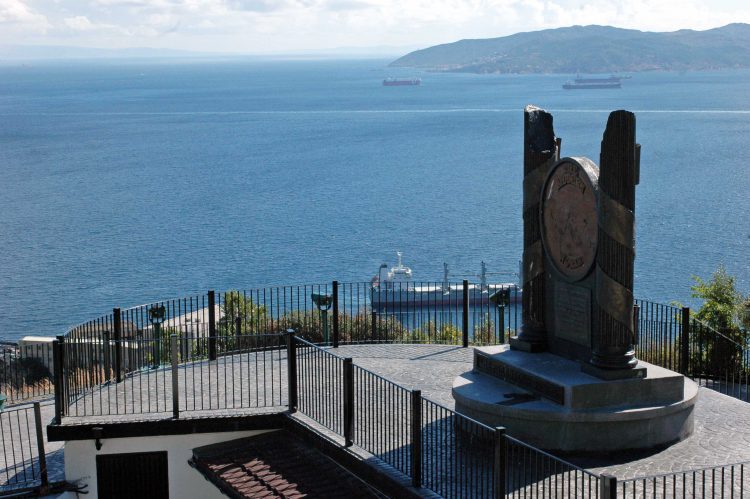 From these pillars, our Gibraltar day trip continues to climb the rock, moving up to 300 metres and St Michael’s Caves. Remains from Neanderthals and Neolithic humans have been found in this cavern. What’s more, the classical civilisations thought this cave was bottomless, with the Greeks even believing it to be the Gates of Hades. These caves have also served important military use for Moors, Spaniards, and Brits. 500 Spanish soldiers once hid over night here preparing for an ill-fated ambush on the British garrison. The name comes from the Spanish name for the caves, “las Cuevas de San Miguel” and survived an attempt by a group of Victorian patriots to change it to St George’s caves. Since Victorian times the caves have been used for entertainment. Bar the second world war when they were used as a military hospital, St Michael’s Caves have hosted operatic performances. 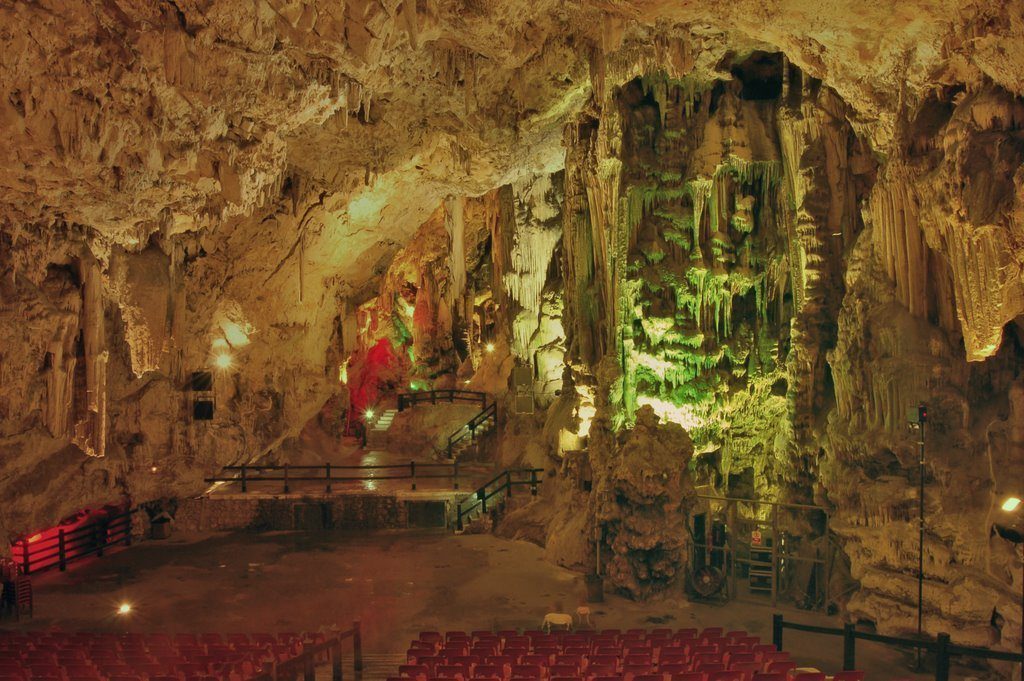 At the caves, the apes will have began to make themselves known. But now our Gibraltar day trip charges head first into the middle of their territory. The rock is home to 300 barbary macaques (not monkeys). Popular legend says that as long as they’re on the island it will remain British. Due to this, Churchill even bought more in to boost the population when their numbers were beginning to decline. Their conservation and care has been so good since Churchill’s time that such a drastic measure would be completely unnecessary today. There are many legends as to how the apes got here: some used to believe that St Michael’s Cave was an underground tunnel to Morocco which they followed, others thought the British bought them over as pets. In actuality they were here long before the British. The most likely explanation is that they came over on boats with the Moors, either as stowaways or pets. 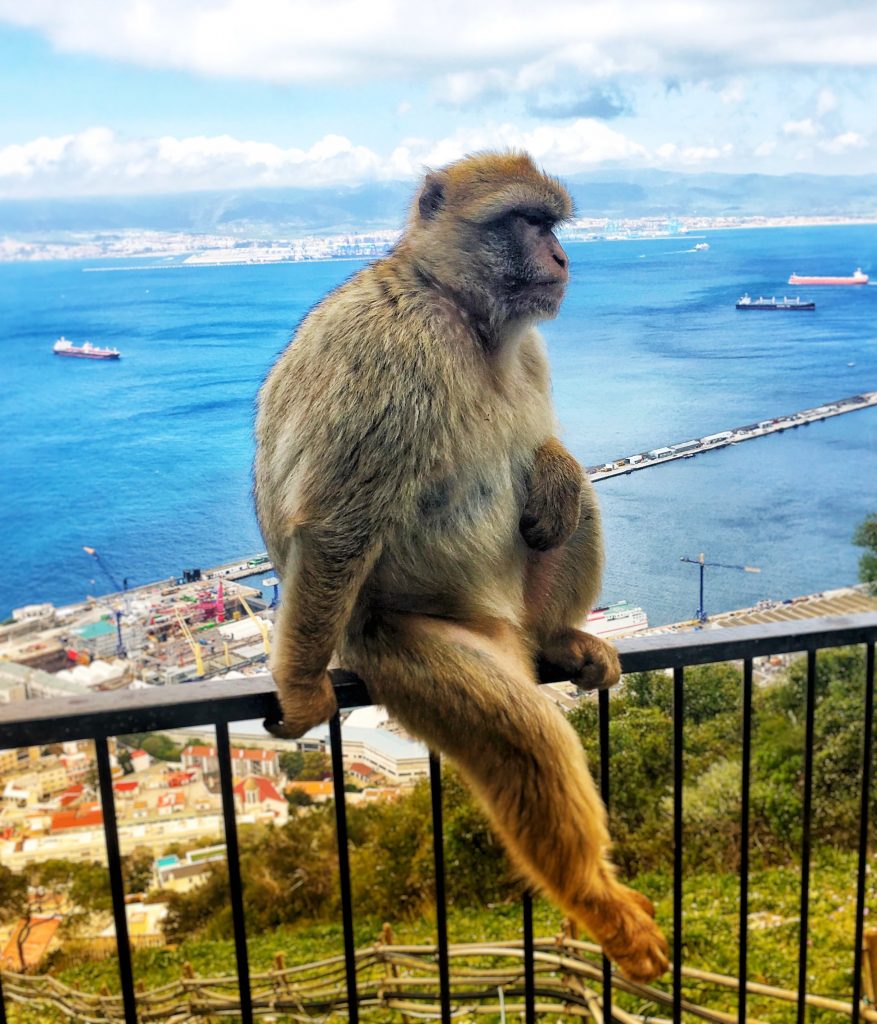 The ape stop is the highest point on the road, and consequently, upon leaving, we begin to head downhill. The final stop on the rock is the Great Siege Tunnels. To understand why these tunnels were built we must first quickly remember a section of the political history of Gibraltar.

It was during the War of Spanish Succession that an Anglo-Dutch force captured Gibraltar in 1704. The war ended in 1713 with the signing of the Treaty of Utrecht in which Spain begrudgingly seeded the rock to Britain. Spain didn’t exactly honour this treaty, though, and continually attacked Gibraltar for the remainder of the century. The largest, and final attack, was the Great Siege (1779 to 1783). Noticing Britain was weakened by the American Revolution, Spain seized the opportunity to attack and take back what they believed to be rightfully there’s. Gibraltar was, however, very hard to attack as the heavily fortified rock made it very hard for bombs to hit the town. The British, though, saw that there was a weakness in their defences and so embarked upon a great mission to get cannons onto a ledge on an unfortified side of the rock.

Once they’d started tunnelling they just kept going, continually building new places from which cannons could fire at the Spanish. By the end of the siege there were 908 feet (277 metres) of tunnels built into the north face of the monolith. Spain had suffered heavy casualties during the siege and consequently has never again attempted to take back the rock by force.

However, Spain has by no means relinquished its claim and create the occasional bit of political fuss (Gibraltans are worried about what moves Spain will make on them after Brexit). The most drastic political move was made by Franco. After Gibraltans voted 99.7% in favour of remaining British during a 1967 referendum, Franco threw a fit and closed the borders. They didn’t reopen until 1985 when Spain was joining EU. 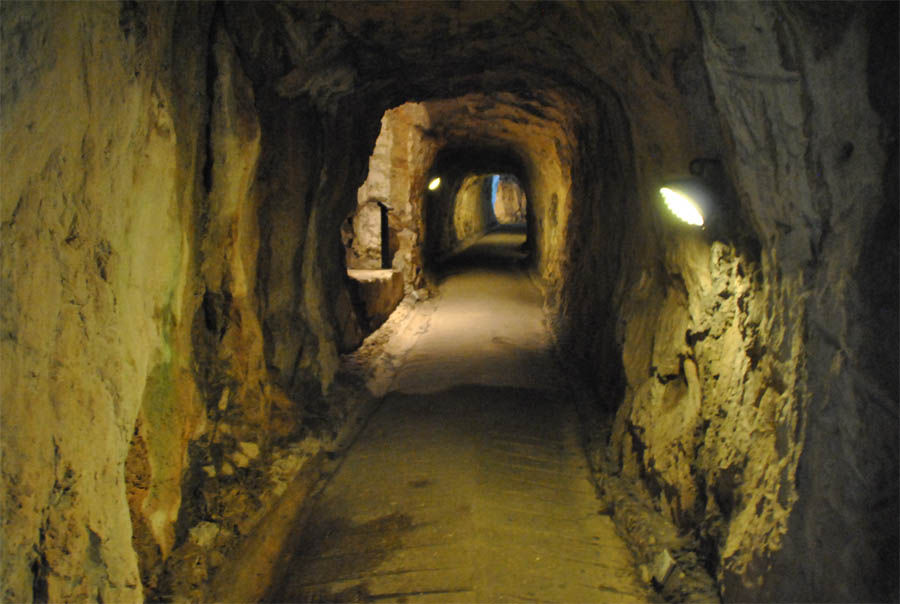 On the way back into town, our Gibraltar day trip passes the Moorish Castle. One of the last remaining relics from the Moors 700 year occupation. Today very little of the original caste remains, due to constant refurbishment for its changing uses. Although today it is just a viewpoint for tourists to look over the town, the castle was used as the town prison until as recently as 2010.

The taxi drops us in town where our Gibraltar day trip takes a decidedly British turn with fish and chips for lunch. The town is in many ways more British than Britain, with red phone boxes and buses to be seen throughout the colonial town and street names such as Winston Churchill Avenue. We walk from the Governors house, where a statuesque guard stands proud whenever the governor is at home, to Casemates Square. The main street is filled with very British pubs as well as more souvenir shops than you can shake a stick at. From the large Casemates Square we catch a bus back to the border to end our day in the British territory. 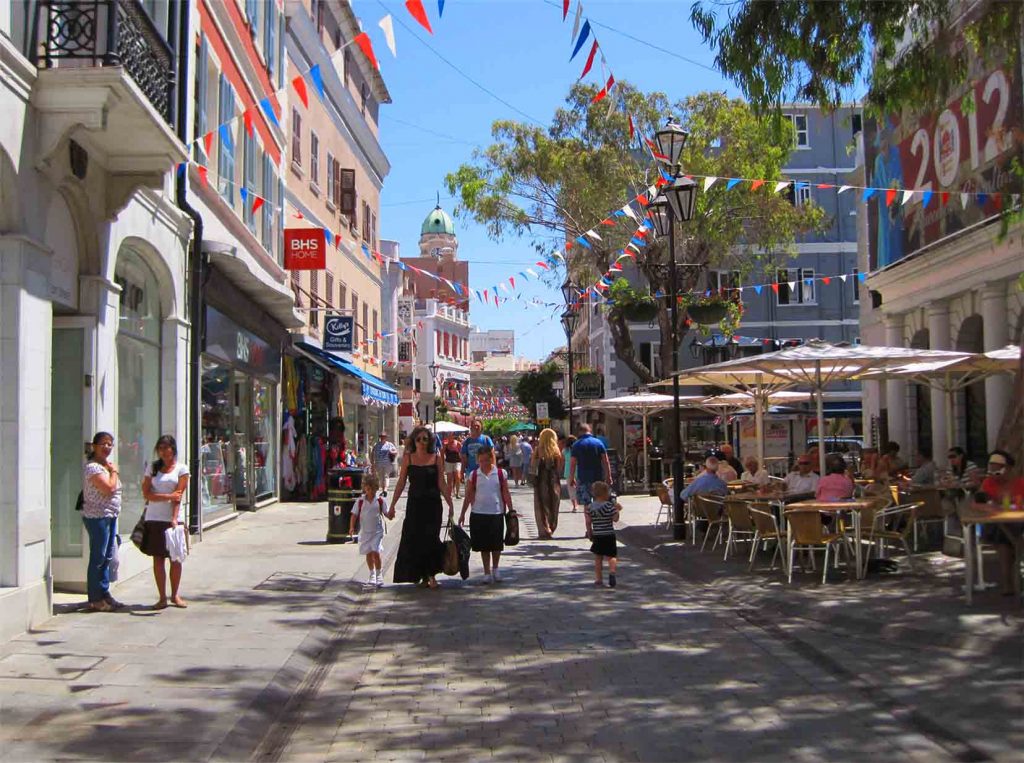 If our Gibraltar day trip sounds appealing to you then click the link and reach out to us for a once in a lifetime adventure you’ll remember forever. This child friendly excursion promises fun for all the family and offers something for all ages. 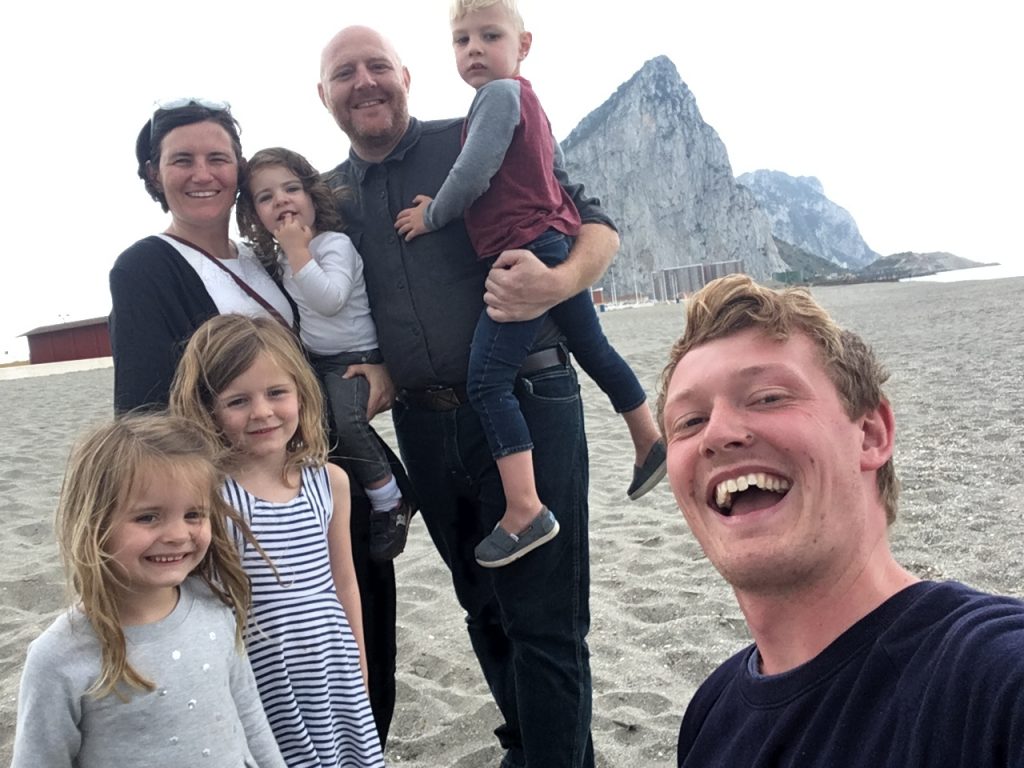 Davey Womack is a tour guide and avid traveller. To read more of his adventures around the world, visit his personal blog.