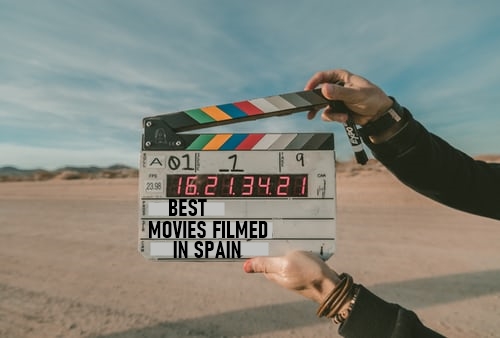 Spain has been the scene of filming, for decades by Hollywood production companies due to its diverse and incredible landscapes that apparently can represent any place. If you’re a cinema lover read this post and discover some of the best movies filmed in Spain. You’ll probably discover movies that you didn’t know were filmed here. Are you ready? 3… 2…1 ACTION!!

The futuristic film that stars George Clooney as a grumpy old inventor who introduces the concept of Tomorrowland to teenage Britt Robertson. It’s a different, futuristic dimension where actions directly affect the real world. To represent this futuristic place, the Spaceship used was actually the City of Arts and Sciences in Valencia.

Cadiz has been the stage for lots of movies, like the one with Tom Cruise and Cameron Diaz in which the two actors get on a motorbike and ride into a bull run. The animals ran down Calle Ancha and into the Plaza de San Antonio in Cadiz. The scene, which is an exciting chase, is full of gored shots from the bulls and skids… full of action! Now you have one more reason to visit Cadiz!

Now, if we are going to talk about the best movies filmed in Spain,  Seville must be on the list! In addition to being one of the most used sets of Spain, we can’t forget the mythical scene in the Plaza de España in George Lucas’ Star Wars-Episode II: Attack of the Clones. Who does not remember Queen Amidala and a young Anakin Skywalker touring the imaginary palace of the kingdom of Naboo?

If you come to Seville, even if it’s for a quick visit or a little longer, tell us and we promise to take you here and who knows… maybe recreate the scene!

Indiana Jones and the Last Crusade (1989)

Indiana Jones’ desire to travel led Steven Spielberg to film part of the movie that closed the original trilogy in Almería, more specifically in the Tabernas desert. Other locations include the School of Fine Arts in the capital. The film starring Harrison Ford and Sean Connery used Andalusia as the setting to leave us with some memorable scenes.

And last but not least…

Even if it’s not a movie, we have to mention Game of Thrones! Does this photo remind you of anything? Perhaps the Kingdom of Dorne…? Places like Barcelona, Valencia, Andalusia, and especially Seville are the stage for most of the key scenes of the series! If you want to know more about the best Game of Thrones spots in Seville check our post.

So here’s our list of the best movies filmed in Spain. There’s so much more we could talk about but lets leave that for another post! What is clear is that Spain’s geography is an ideal scenario for all kinds of audiovisual creations. If you don’t believe it, ask the producers of Game of Thrones!