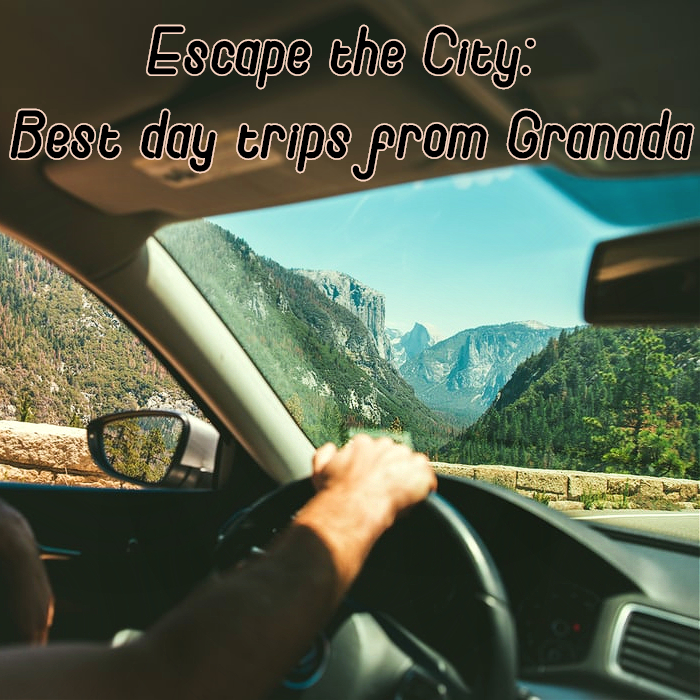 Traveling can be tiring, especially if you’re visiting big cities, like Seville, Malaga or Granada. Sometimes you just want to escape the city life during your vacation; but don’t worry, we’ve got you covered, here’s our list of best day trips from Granada!

Now, all the places on this list are within the province of Granada (in Spain most of the provinces got the same names as the cities, very original, huh?). If you love a good hiking trail and cute towns, to Escape the City, then the best day trips from Granada are just for you:

Montefrío is a small town in the province of Granada. It is only one hour away from the city of Granada. This lovely white village was actually named as one of the top 10 best views in the world, by National Geographic. It has three main hiking routes: Peñas de los Gitanos (get ready to time travel and find Megalithic Necropolis and prehistoric caves!); Arroyo de los Molinos; and Sierra de Parapanda.

Guadix is only 45 minutes away from Granada. The architecture of the town is a mix of Roman, Jewish, Arabic, and Christian. It is known as the “European Capital of Caves”! Can you guess why? Yes, it has more than 2000 inhabited underground caves, that are adapted to modern times. At the same time, they have a natural constant temperature of 19ºC (66ºF), and noise reduction provided by the clay. You can hike through Guadix Geopark, to admire the landscape of colorful badlands (they’re not really bad) and the paleontological sites.

The name Gorafe means “upper chambers” in Arabic; referring to its historical cave houses, that date back to the 12th century; excavated about 150 meters from the ground. You can hike around the 240 Neolithic dolmens scattered in 10 necropolises, which is the largest concentration of prehistoric burial mounds in Spain. There’s an actual trail race, called “Trail Run Desierto de Gorafe”, that takes place annually, which has sadly been canceled this year due to COVID-19.

This is a very special and small town in the Alpujarra area, with only 340 people! It is a bit further from the city of Granada, about 1 hour and 15 minutes. It’s one of the few white villages that keeps the Berber architecture. Its location is great for hiking, as it is on the southern side of Sierra Nevada mountains, following the Barranco de Poqueira hiking route.

If you’re not the hiking type, maybe you’re a swimmer! The province of Granada offers a great variety of water experiences for summer and winter. Here are our main picks to escape the city: best day trips from Granada for relaxing:

Only 50 minutes away from the city of Granada, you can find natural thermal baths! Winter is coming (no pun intended), but if you love water as much as we do, you definitely have to visit the baths of the Alhama de Granada! The rural pools are free to visit, and there’s a paid spa as well. The water is at 40ºC (104ºF), so you don’t freeze in the cold winters of Granada.

Just like thermal water, the Fuencaliente (literally “Hot fountain”) spring of Orce, has a high content of alkaline minerals and it flows at a constant temperature of 21ºC (70ºF), which you can enjoy nicely during cold seasons. Orce also has the most important paleontological sites in all Europe and Asia! This town is 1 hour and 30 minutes away from the city, and is also part of the famous “white villages“.

Salobreña is one of those magical places that has it all! If you are already planning a summer trip; less than an hour away from Granada, you can find the castle, the cliff and the beach of the coastal white village of Salobreña, all in one! As if this weren’t enough, Salobreña also has hiking trails, such as Vega Baja de Salobreña, Monte Almendros, and the Mediterranean Route from Salobreña to Almuñécar! This is definitely an experience you cannot miss!

Another summer destination is Almuñecar. This is the furthest town in our list, but it is worth it. Almuñecar also has a mix of Roman, Arabic, and Christian architecture! Just like Salobreña, it offers the hiking trail that connects both towns; and the wonderful beach, which they say is the “bluest” one in the Mediterranean.

Since we are already in the spooky season, of course we had to add the top best places to celebrate it in Spain! These towns have their own legendary traditions, that you can’t overlook. Escape the city: best day trips from Granada for Halloween:

You may see this name a lot if you buy bottled water in Spain. Lanjarón has one of the purest water springs in the country. Located in the mountain range of Sierra Nevada, less than an hour away from Granada, this town has a tradition called “Fiesta de las Castañas” (Chestnut Festival), which is what you would call, the local Halloween party. The whole town is decorated with ghostly figures, locals dress up; and the town gives away free chestnuts and anise, we are always ready for that!

The last town in our list, is Soportújar. It is literally nicknamed “The Witch Town”! Many legends about witches and ghosts involve this place, referring to the stories from the Inquisition time. You will see figures and statues of witches all over the town, not only during Halloween. They also have a “Bewitched Fair”, a hiking trail and a viewpoint called “Coven”, and of course an amazing Halloween festival.

As always, we don’t want you to do all the job by yourselves, so keep in mind that letting a travel specialist like us to organize your day trips and tours is always a great option to make the best out of your holidays!

Did you know that this year, the Alcazar of #Sevil

Learn and have fun seeing a complete unknown side

Want to learn more about the home of the Iberian #

Enjoy a comfortable 😌 private transfer between

Every traveller has a home of his own, and he lear

Have you heard 👂 the news??? Iconica Fest is ba

Thank you to our great guides for creating unforge

Hello everyone 🙋‍♀️! Here is a small reca

The famous angel 👼 of Saint Michael in #gibralt

It is said that if you rub Maimonides foot 👣 yo

Save the date 📝and enjoy an unique experience w

Have you 👀 ever been on a stage? Last chance to

Did you know that a few steps from the mosque-cath

"One's destination is never a place, but a new way

"Flamenco has only one school: which is wether to

"Live life with no excuses, travel with no regret.