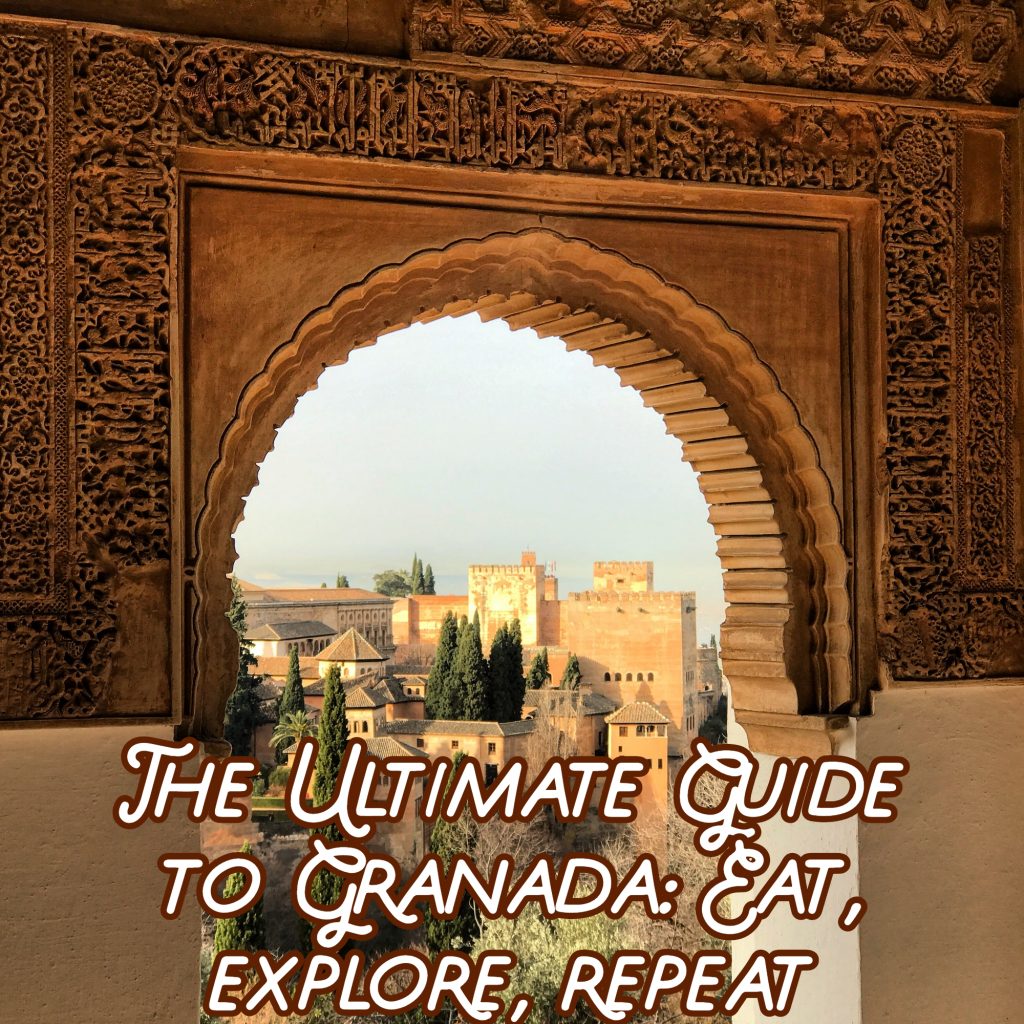 Are you planning a trip to Granada, but don’t know where to begin? We bring you the Ultimate Traveler’s Guide to Granada, to eat, explore and repeat! Check out our list of the best things to do while you’re here:

There’s no doubt most people have heard of Granada because of the Alhambra Palace. It is certainly the crown jewel of Spain, and it actually is the second most visited monument in the country; after La Sagrada Familia of Barcelona. According to historical documents, the first part of this citadel was built around the 9th century, as a fortress. It was completed towards the end of the Muslim Kingdom; in the 15th century, along with the “Summer Palace” of the Alhambra; called the “Generalife” (For the record, it is not “General Life”, and it means”Architect’s Garden” in Arabic).

The detail and preservation of the Palaces in the citadel, always leaves visitors in awe (trust us, you will want to live there!); as you can still see the arabesque carvings and calligraphy detailed in all the walls. If you want to explore this wonderful place, you can buy tickets online to visit both the Alhambra and the Generalife together. On this ultimate guide to Granada, we recommend doing so months before your trip, as they sell out fast.

Although the Albayzin existed since the Roman times, it became a Muslim quarter during the Islamic Rule. Some may say that visiting the Albayzin will make them forget they’re in Spain; but rather in a small quarter in Morocco (we feel you!). The main style of the houses in this place is the “Carmen“. A house with an annexed green space; garden and orchard at the same time, which constitutes an extension of the house.

This quarter is in front of the hill of the Alhambra; so you can actually walk from one place to the other. At the feet of the hill, you will find a street that separates the two sides. This street is called Carrera del Darro, and there, you will find other interesting places like; the Inquisition Museum, the Archeological Museum, and El Bañuelo (archeological remains of ancient baths).

At the top of the hill of Albayzin, you will find the famous San Nicolás Viewpoint; where you have a fantatstic view of the Alhambra. Right next to the viewpoint, you can find the Mosque of Granada. An insider tip, is to go to the viewpoint of the Mosque, which is usually less crowded. We also recommend visiting the Dar al-Horra Palace; which belonged to the Queen Aixa, mother of the last Muslim ruler of Granada, the King Boabdil.

Granada is not only hills. On this ultimate guide to Granada, we guarantee, you will also find hidden gems in the city center, the flat area. While the Cathedral of Granada is not the most appealing one in the region; it has an interesting origin and architecture. The first part of this Cathedral to be built, was actually the Royal Chapel.

The reason why you should definitely visit, is because the remains of the Catholic Kings are there. Ferdinand of Aragon and Isabella of Castile, chose to rest in Granada; as it was the last Muslim Kingdom they conquered; which completed the Christianization of the Peninsula. You have to buy separate tickets for the Cathedral and the Chapel, at the entrance.

If you’re in a shopping mood, we recommend going to the Alcaicería, which is essentially the souk of the city, and it is right beside the Cathedral. You can find regular souvenirs, and unique artisan products as well. If you go further and cross the Catholic Kings Street, you will get to the Corral del Carbón, which was originally the Nasrid market. Now this building is used for exhibitions and shows, so you can enter for free and enjoy the culture of Granada, as if you were traveling back in time!

You probably may have heard of the “Flamenco” caves of Granada. Yes, there are actual caves there! The origin of these caves is not very clear, but historians believe they could have been created during the expulsion of Muslim and Jewish population from Granada in the 16th century. They were certainly joined by the gypsies who arrived afterwards, and made the caves world famous now. Most of them are modernized houses with electricity. Others, have been transformed into Flamenco venues, creating an experience like no other.

At the top of the hill you can find the Abbey of Sacromonte. This Abbey is in the place that gave the name to this hill. “Sacred Mount”, as the relics of Saint Cecil were found there. In the patio of the Abbey, you have an art museum. But of course, even if you don’t want to enter the Abbey (yeah, visting an Abbey doesn’t sound like the most fun thing), the views of the Valley and the Alhambra from there during our sunset tour, are spectacular; a must-see.

And last but not least in our ultimate guide, you definitely have to try the tapas of Granada! The best part, is that they’re “free”! Originally, this tradition was common in all Andalusia, but now, there are just a few places that follow it. However, in Granada, everyone practices it! The rules are easy: If you order an alcoholic drink, you get a tapa included in the price of the drink! And not just some olives or crisps; we are talking about real food. You can get a small portion of paella, fried calamari, shrimp, montadito, grilled sirloin, or anything that is categorized as a tapa in the menu. Of course, there is one small detail. You don’t get to choose it.

We hope that this detailed ultimate guide helps you sort out your bucket list for Granada. Let’s not forget that everything we mentioned can be included in a personalized private tour of Granada. We can also create a tailored travel plan made just for you, so you can make the best out of your trip to Granada.