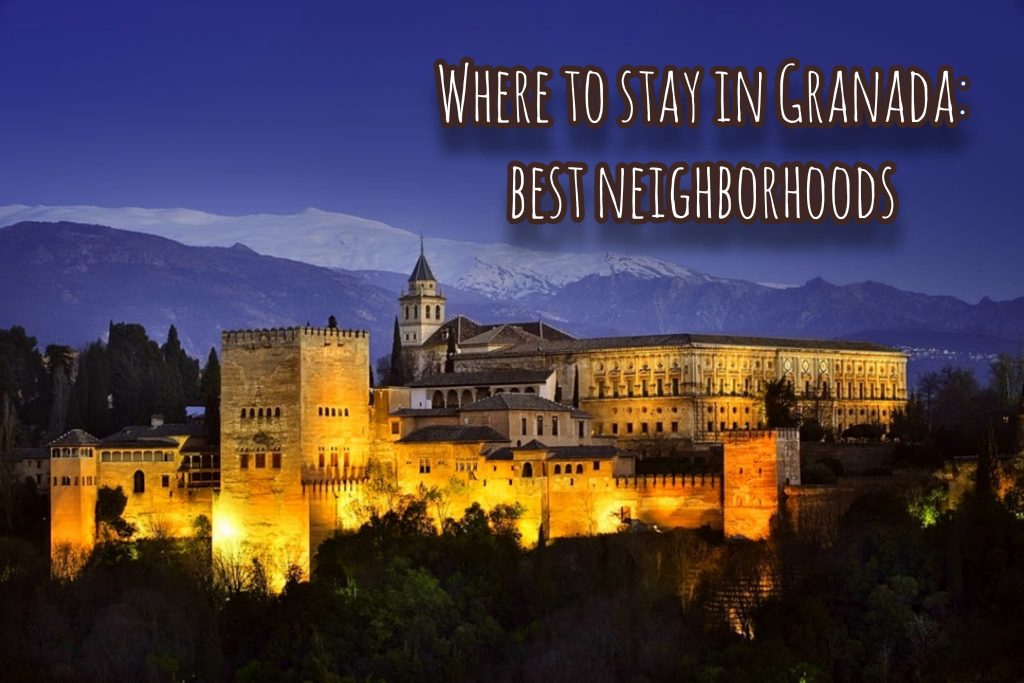 It is no secret; Granada is undoubtedly one of the most beautiful cities in the country. Its beauty, its Andalusian flair, its multicultural character and the atmosphere in its streets are just some of the characteristics that define this city, making it a perfect tourist destination. Are you going to visit this special city? Read on and discover where to stay in Granada, Spain to make your experience in this city unforgettable.

Don’t know where to stay in Granada, Spain? One of the best areas is undoubtedly the city center. The heart of the city, one of the most beautiful areas of Granada, extends around the Nueva and Santa Ana squares. From these depart narrow streets full of souvenir stores, restaurants, Arab tea shops, hotels and tapas bars with terraces.

It is also composed of very significant monuments such as the Cathedral or the Royal Chapel. In addition, it is close to the Alhambra and some emblematic neighborhoods such as Sacromonte and the Albaicin. It is one of the most touristic neighborhoods and, therefore, the one with the most dynamism, animation and hotel offer. For this reason, it is an excellent option for travelers who want to be close to the most relevant points of interest.

If you don’t know where to stay in Granada, Spain, the Alhambra neighborhood is one of the best in the city. This area is located on the hill of al-Sabika, with the Sierra Nevada mountains as a backdrop. In addition, it not only have beautiful views of the Albaicín and the city center, but also this area is crowned by the most emblematic monument of the city: the Alhambra. What more could you ask for?

Some recommended hotels in the Alhambra neighborhood are Parador or Alhambra Palace.

3. ALBAICÍN, THE MOST CHARMING NEIGHBORHOOD IN GRANADA

The Albacín neighborhood, the most iconic of Granada, extends from the San Cristóbal hill to Sacromonte. If you don’t know where to stay in Granada, Spain, this is undoubtedly the most charming neighborhood in the city.

Its charm lies in its narrow and steep streets where you can discover traditional Moorish houses, tiny squares and some palaces, such as the Nasrid Dar al-Horra. It is a totally different area from the city center. It is not a commercial area at all, and at night it is empty. However, it is also part of its charm. Going for a walk through its quiet streets at night and approaching one of its viewpoints to admire the illuminated Alhambra is a pleasure. Moreover, if you are a tapas lover, this is your neighborhood!

4. SACROMONTE, TO SLEEP IN A TRADITIONAL CAVE

If you want to live the experience of sleeping in a traditional cave in Granada from the 16th century, Sacromonte is the perfect place. However, it is true that it is not one of the most common neighborhoods to stay in.

In this neighborhood, you will discover the true essence of flamenco and gypsy culture. So it is a neighborhood with a lot of “duende”. We recommend that you don’t leave Sacromonte without seeing a live flamenco show, it will leave you speechless!

5. BEIRO, A LIVELY AREA WITH A YOUTHFUL ATMOSPHERE

Want to know where to stay in Granada, Spain? The Beiro area could not be missing in this list of the best neighborhoods in Granada. El Beiro is located in the central part of Granada. Here you can immerse yourself in some emblematic places of interest, such as the bullring, the pillar of Triunfo or the monastery of San Jeronimo. Here you can also find the Faculty of Medicine, so, as you can imagine, there is a very youthful atmosphere.

It is important to note that it is very well connected, as the Granada train station is located here. However, the hotel offer is not as generous as in other areas, but, fortunately, the prices are lower, including the most luxurious hotels.

Some recommended hotels in the Beiro are Allegro Granada by Barceló or Abba Granada.

Are you looking for a quiet area in the city of Alhambra to disconnect from the routine? The Ronda district is perfect for you! This district is located in the westernmost part of Granada, along the banks of the Genil River. You can take advantage of your stay here to visit the Science Park, the Palace of Alcázar del Genil or the Federico García Lorca House-Museum. Moreover, if you are vegetarian, don’t leave the Ronda district without visiting El Ojú, a vegetarian tapas bar that will be the icing on the cake of your trip!

Some recommended hotels in the Ronda district are Barceló Granada Congress or Occidental Granada by Barceló.

Choosing the right place to stay while going on holiday is one of the most important bits while planning your trip. We hope this guide will help you find where to stay in Granada, Spain. If you are interested in looking for accommodation in any other corner of Andalusia, we recommend you to take a look at our blog about the best neighborhoods in Seville and if you need more information, do not hesitate to contact us! Now is time to pick a hotel!