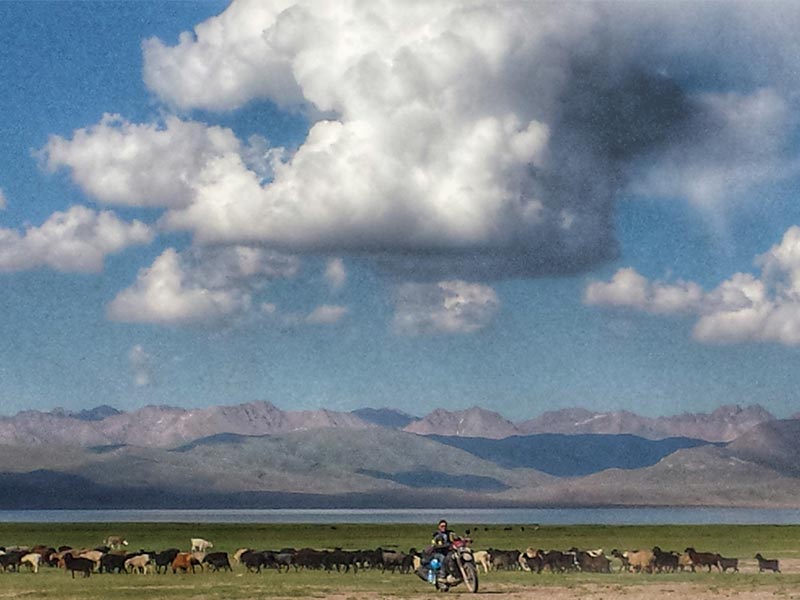 In a normal situation it should neither be a problem to get a cup of tea nor will it make its way to the title of this post. But if there is something that makes traveling so special and unpredictable that would be the simple fact of discovering the hidden dimension of daily things. Some kind of tip of the iceberg situation!

Generally I tend to travel as a solo traveler. Since there is nothing else that makes me happier than feeling like a trunk floating aimlessly in the sea, exposed to whatever crosses my way. But on and off and due to my job as a tour leader I do accompany groups throughout their journeys in more or less exotic countries. Surprisingly enough, I enjoy a lot these tours as it enables me to see the world through different eyes and react in a different way.

My story this time starts at Song Kul Lake, a vast quantity of silver-like water, that is pitched between the barren hills and exposed to the wind year around. This is a special place as you would never feel lonely in the middle of its vastness. The wind will be always chasing you. We normally have a 2 days stop there and the chance to live in the yurts, do some walking, horseback riding and experience for a short glimpse of time into the lives of the semi nomads who live there during the summer. This would sound quite pleasant; yurts, semi nomads, withering heights of Kyrgyzstan, wild horse…,  But, in reality this becomes the hardest part of the trip due to the following factors: cold, windy, being deprived of the normal commodities such as a proper room with walls and windows, hygienic facilities such as bathroom or even a wash basin, no heating, no hot water, no door to close when the freezing wind blows restlessly. My days at Song Kul are always a cold and inhospitable memory of endlessly cold fingers, cold ears, cold nose, no way to hide yourself as the yurts are not the best shelter, no way to wash your face as the water temperature is around 0,… No matter how inhospitable the whole setting, there are always tourists that amaze me with their cross border ability to demand the same service that they would expect down there in the normal world and exactly here is, where the cup of tea enters our story. It was a chilly day, long as all chilly days when you don´t know what to do and how to keep yourself busy till the evening arrives and the nomads make some fire to warm up, have dinner and crawl into the sleeping bags for the rest of the time with no intention of getting out of them throughout the night. I was walking from a yurt to the other one to check if everybody was ok when a school teacher with some artistic affection stopped me and asked if they could have some tea. My response was yes sure, although I was well aware that having a cup of tea at this time would mean a lot of extra work. Once in the kitchen I passed the massage and noticed the not very happy look on the face of our host. In no time the old Kyrgyz granny was sent out to make some fire, heat up the old carbon samovar and make tea. 45 minutes later when we were all gathered in the main yurt where the social life of the camps takes place and all the cooking is done, the lady who asked me for the tea complained about the cup of tea that she hadn’t received. Not knowing what to answer or to remind her about where we were I asked her to come out with me and see by herself the whole process of making tea. From the moment that the old man gets out into the wind-swept land till the inviting cup of tea lands in her hands comfortably and promising. She did understand that having a cup of tea does not mean the same thing back in her country than at Song Kul Lake. But, there was something that told me that next time she wants to have a cup of tea she would expect it the way she normally does, immediately! She was the person who was more focused on taking artistic pictures, to look for the setting carefully, to pose and to see every single place we visited through the camera eye instead of her own eyes or heart. She did see the old man making her tea but did not appreciate the fact so much to go and grab her big lens camera to take a picture of a real life and a real cup of tea. Maybe she didn´t think that a cup of tea was worth being taken a picture of??