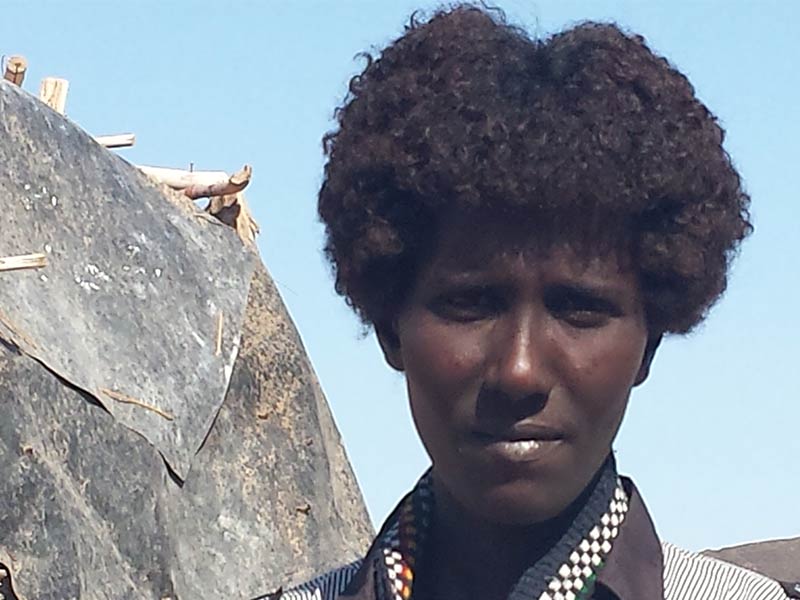 Traveling is for me a lot like hunting, chasing the lure of the unknown and stepping into unexplored territory without any expectations. And my trip to the Afar region could not more unexpected. The Afar probably rank among the top 10 of the most fearful African tribes,. The ones that pride themselves with cutting the bulls of their enemy. But my story is a whole different one, a story about simple people resisting to the hostile climate of their region, known as the hottest place on earth. My story is about nice and simple people offering me their precious fresh “chat” as well as a free language course on Afar! 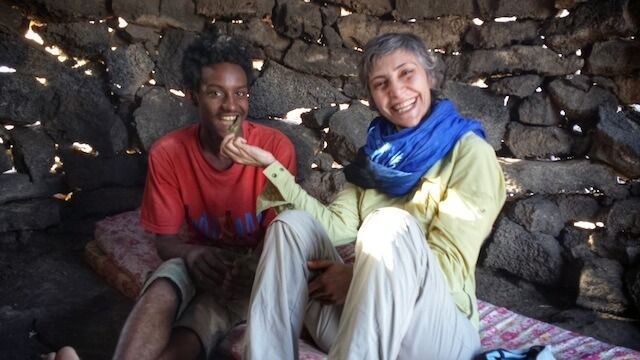 I happen to be invited to dinner by Desta the wonderful owner of Debre Damo Guesthouse. Among the guests there was a local tour operator, Israel, who was seeking partners to expand his buiness. After some conversation he offered me to join his tour to the famous lava lake and salt mines. And it was for free. The idea was that help him improve the tours. The tour was to the famous Danakil depression, the second lowest point in Africa, 123 meters below the sea level and one of the hottest spots on earth (bad news to my ears)!  The main attraction is seeing the lava lake, the salt mines and being able to spend the night at the volcano, and warm up yourself with the heat coming up directly out of the burning heart of earth. Before this dinner I did not even know that such things existed so I was curious to go and see. But to be honest and no matter how grateful I was to be invited and save the 500-700 $ that you pay for this tour I wasn’t happy at all about spending 2-4 days in such a hot place and without a shower! Anyway, the sense of adventure and the fact that it was free finally overcame my hesitance due to the lack of shower! 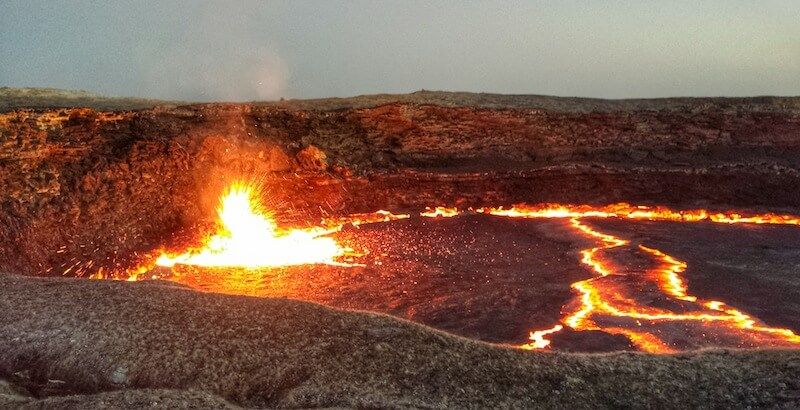 When we left the Tigray region the difference was all clear, the land was becoming more inhospitable and so the people. After some heavy off road driving in deep sand we reached a very hot, dusty and soulless village. It didn’t look as if they were ready to welcome a bunch of white tourists. I could not accept or understand that much hatred so with the help of a local boy I asked the Afar people who were gathering around whether they liked or hated the tourists: Any guess? No, we hate them!? 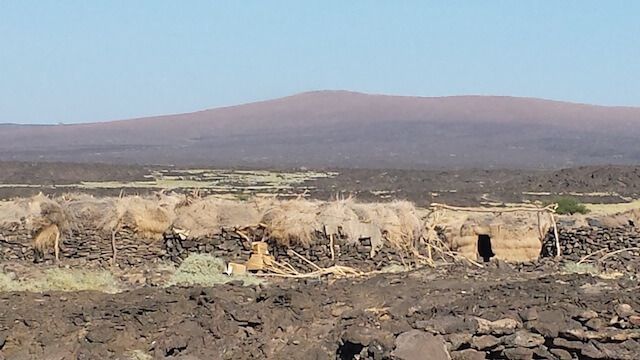 I was relieved when our guide and driver took us to another village closer to the Volcano to wait for the sunset and the heat to die away so that we could start our slow climb to the summit, to the 500 US dollars crater. One of the 5 Lava lakes on earth. This Afar village was a totally different experience. People were nice and smiling. So when I sneaked my head in one of the basic huts made out of stone and some hey on top I found out that were all sitting with some green plants.

I was curios to see what it was and it fact it was that precious green and energizing plant called, Chat, the omnipresent chat. I was invited to join and have a chat or some “Chat” with the Afar. What went on in the next 24 hours was an amazing experience of friendship, companionship, chatting, linguistic & cultural exchange…. We chatted, we ate Chat together accompanied by some peanuts to reduce Chat´s bitterness and we made jokes, we had loughs, they started teaching me their language, they were all nice words, starting with the friend, good, nice, thank you, Hi, be careful… Is it the famous Afar people well-known for their legendary savageness towards outsiders? Maybe it was the religion or the language that helped a bit as we all were supposedly Muslims and we all could speak a bit of Arabic. They just did not expect any white Western Muslims and were all very surprised when I started telling them in Arabic that playing cards is not allowed in Islam and they all will be sent to hell! :). I was so thankful to the so much detested Arabic as well as Quran lessons back at school time in Iran. 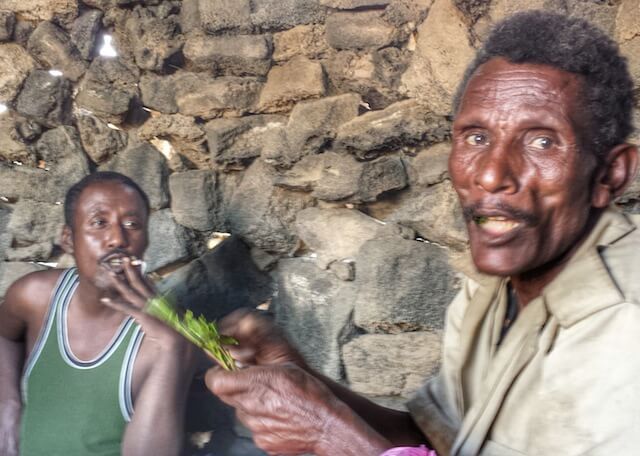 When the time arrived to hike up to the crater, my Chat buddy, the Afar police, took me by hand and walked with me to the top all way long. By then I was all hyper not because of the chat but because of the 100% Afar experience. 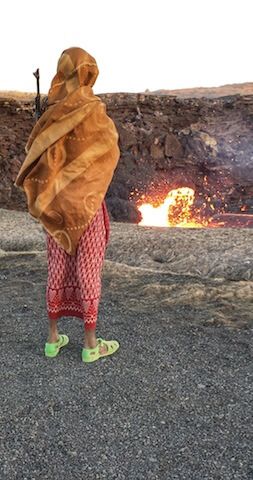 The night was a singular one, it felt as if I was allowed to take part in a greek mythology and sit with the gods. The open wound of earth was splashing hot lava onto the dark night in a very vivid orange, the night seemed to be wrapped up in an orange haze, the sound of the half alive crater was impressive. As we walked on the hot soil you could hear the fresh ash crack. It was a night as no other night but still the friendly company of the Afar was the highlight of the night. 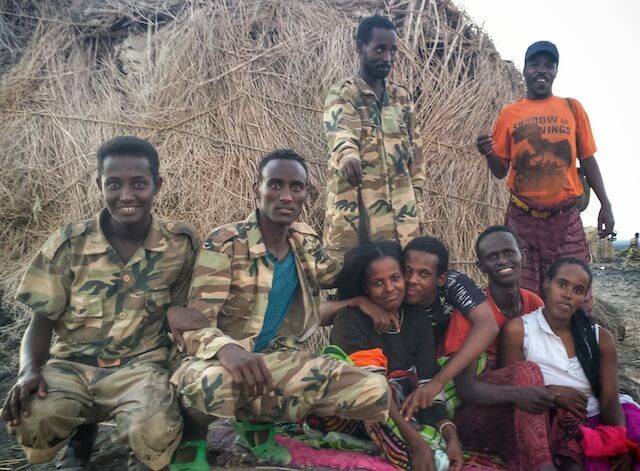 One thought on ““Chatting” or “chating” with the Afar!”