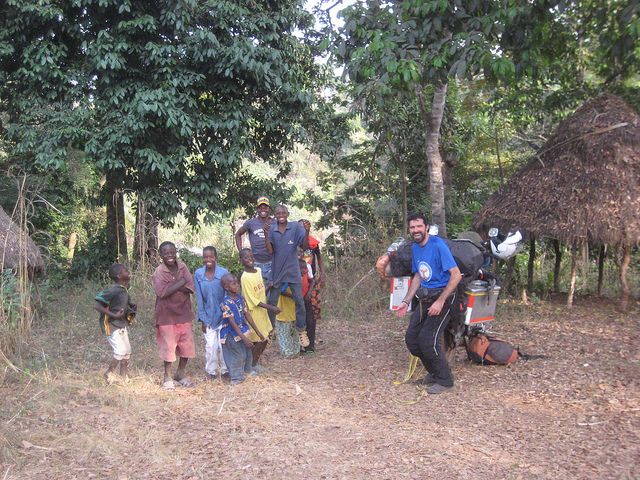 If you thought you had a name before arriving in Africa you were absolutely wrong as according to most African traditions you only can be madame or monsieur Cadeau, Bonbon Bic, or directly madame L‘argant!
Some fellow traveler once said: “if I knew those tourists who give away all these little and apparently harmless gifts to the kids I know what I would do to them”! As tough as it may sound but you cannot imagine the hard time you´ll have in Africa being stopped at every little step you take and asked by the kids for a “cadeau” –gift in French-, “bonbon” –sweet- or a Bic. They would not let you go off that easily no matter how hard you try. Once and after hours of bad tracks, tropical heat, sand and sweat we got to a remote village which was the gateway to a secluded waterfall. Naturally we had to do some more tracks riding randomly through the fields and the bush in order to find the waterfall which was not signposted. At some point we stopped to ask the locals. Without any hesitation they assigned a little barefoot kid to show us the way. By the time we got to the waterfall there were more than 10 wild creatures running around the bike, pushing from the back, jumping in front of it, trying to move the stir wheel while we were riding at a slow pace or sounding the claxon. Luckily we got there with no casualties but once there at the foothill of the amazing cascade they started to ask unanimously for a little compensation looking expectantly at our big bag as if it was full of bonbons and bic!. It always made me feel like Messiah in his mission to spread God´s word across the world. No matter how remote and isolated the villages are strangely enough they always know that one day the white man would arrive and will bring god´s word or at least some bonbons or Bic!
At another occasion and in order to avoid the midday heat we settled out quite early in the morning. At 7 am we stopped to take some pictures of the amazing Baobab trees standing along the road. I was approached by two beautiful young girls with a big and shy smile. After a brief exchange of smiles and after I asked them for the water well to get some water it came out that they did not know any French or what so ever but they knew exactly how to ask for “l’argant” –money in French- as that´s what they did. Let´s call it practical French rather than survival French since nobody would ever survive only on bonbons and cadeaux!