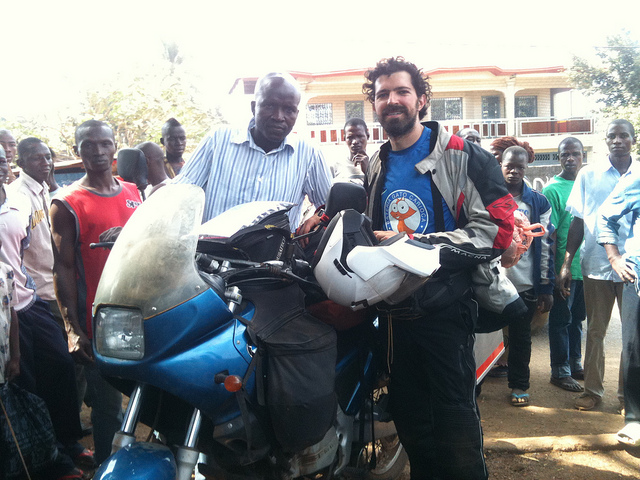 114 days of riding around and its stats:

Number of times we fell down: 15

Visits to the mechanic: 11 Police checkpoints we were stopped at: 50 at least in Mauritania, many in Western Sahara, a lot in Gambia, a few in Guinea & Senegal and only 2 in Mali

Number of bribes: 1 in Dakar

Number of days crossing the Sahara: 12

Number of days with rain: 6

Longest ride: from Kiffa to Bamako for 16 hours! Never ever again

Number of ferries we took: 5 Days we spent at hotels: 60

Days sleeping in the desert: 6

Days sleeping on a boat: 35 hours of boat ride through the river Niger in Mali. Absolutely recommended

Days spent at the seaside: 19

Worse hotel: Fes/Morocco –don´t even want to remember the name, Brothel/hotel/club in Sigiri/Guinea, -I doubt if it had any name at all-

Guided tours we took: 3 in Timbuktu, Dogon country –I wish we had not taken it- and hiking in Fouta Djalon Number of concerts: 4 full days in Timbuktu and 4 more times

Number of private parties we´ve been to: 5

Number of nights out: 3

Number of hang over:  1 time David in Dakar, a really bad one

Coldest places: Morocco. It was freezing cold both when we arrived in December and then when we were heading back again in April.

The most difficult ride: Guinean Tracks around Fouta Djalon area The most surrealist country: Mauritania. Go and check it out by yourself! Most beautiful landscape: Mauritanian desert and its endless variety, fairytale like vegetation in Casamance and impressive Moroccan Mountains

Best food: None. Maybe the fresh juice stands in Morocco Nicest people: Scattered around but generally Morocco no matter if Berber, Arab or people from Western Sahara

Worse people: Senegal –except for Casamance- & of course Dakar

Different cultural or national identities we had the chance to learn about a little bit: the Berbers in Morocco, people in Sahara, Djola people in Casamance, the Moors in Mauritania –white & Arabic speaking Mauritanians-, Bambara & Soninke in Mali, Tuaregs in northern Mali, Dogon people in Mali, Peul people in Fouta Djalon/Guinea, Sere in Gambia and Senegal, Mandinka in Gambia, Susu in costal part of Guinea, Wolof in Senegal

Cheapest country: Depends on what but generally Guinea

Most aggressive people: Senegal except for Casamance Best fish: Catch of the day in Cap Skiring & Kafountine/Casamance Ingredient most used in cooking: Maggi

Most typical breakfast in black Africa: bread spread with mayonnaise

Most amazing thing throughout the journey: the freedom to move around and see different realities day by day

Most horrible thing: the situation and exploitation of the women throughout Africa

One thought on “TRAVEL STATS”