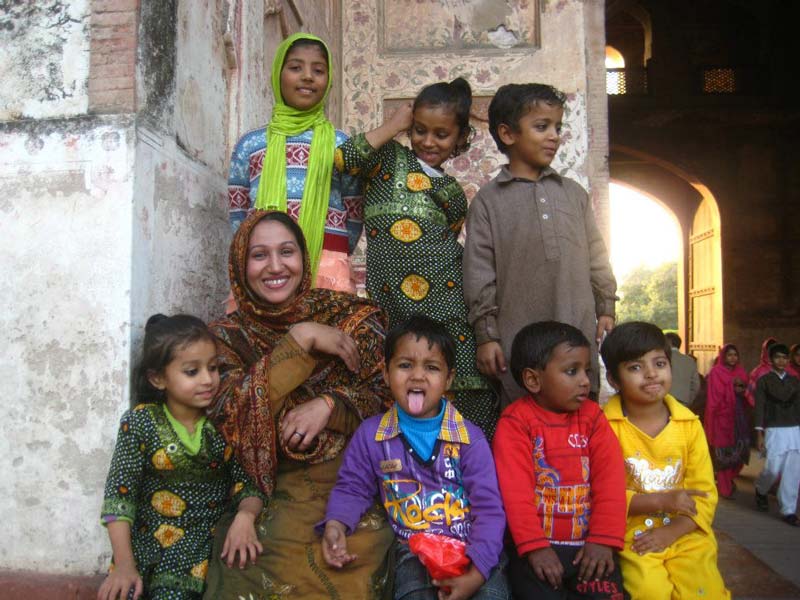 Do you believe in luck? I do and I think we were lucky to be guided to a host in Lahore, who was into riding. Through him we got to meet many Pakistani riders, with not very spectacular bikes but instead big smiles, readiness to have a good time and some plans for a weekend ride. A major part of the charm of travelling lies in its unpredictability and the wide range of choices you have. This time we could choose between heading north to Islamabad to visit the Karakoram highways or linger a few more days and go riding with the MAP guys, a motorcycle club in Lahore. In the end and regardless of the lack of time that was chasing us we joined the Lahore riders for their BBQ ride out. What we did not know, that the BBQ and a leisurely ride would turn into the most adventures ride I could wish for; pitch dark, in rocky soil with bikes that were not prepared at all. That was not what I had imagined before. Upon arrival at the magnificent Rohtas Fort the group welcomed us and urged that we had to hurry up as there was a long way to go and some part of it would be off road. Long way to go? I calculated 2 hours, Off road? I naively thought of some little stones on the road. 2 hours were extending itself like a loose rubber band into the infinite, and the little stones were sharp rocks with considerable dimensions, promising a lot of troubles starting with some broken bikes and a few broken bones.

My travel buddy, Behzad, an experienced rider, and I (not a good rider at all) were startled to observe that there was a full bunch of riders, riding ordinary 125 cc or even less bikes through the night, trying to reach the summit of the only mountain in that mostly flat area just to make a BBQ! Nobody knew about the road conditions or the distance we still had to go, it seemed that nobody did neither know who had planed the excursion nor who to blame for the hard time we were having. At some points and after endless falling and shaking, sliding, pushing and getting off the bike some were suggesting to head back, some others suggested to camp just there, some said that the summit was only 50 meters up there. Exactly this common mistake, called hope was what fooled us all and made us continue our apparently aimless night ride towards the holey mountain.

Were the guys who were seeking El Dorado feeling the same? Lost and undecided but with some remote hope that El Dorado was just around the corner? Was it the same with Christopher Columbus when he sailed off for America? Is it the right attitude when you are stuck in a place and don´t know whether to head forth or head back? I´m still trying to unravel this existential question. What also caught our attention was the very calm and relaxed mood of all the Pakistani riders; no complaints, no nagging, no blaming, no spirit of revolution at all. There we were wrapped by the night, in the middle of a rocky road, on the way to the holey summit, with no idea of how far to go and they were all full of smile and in high spirits. We thought this is what makes the difference between the Pakistani riders and all the other nationalities. In Germany this would not happen at all as everybody would have planned out every single detail, in Spain people would habe started to complaint and at some point have made a stop to eat their tortilla de patatas, in Iran, people would have criticised so much that some serious actions should haven been taken in order to calm down the general anger. But in Pakistan, they just kept on riding towards the faraway holey summit that actually did exist as we got there around midnight after 6-7 hours of jumping form one rock to the next.

I was wondering who would have enough energy to make the BBQ till in front of my surprised eyes I discovered a guy, a professional Kebab maker, who was hired and brought in a Jeep specially for this reason; to make the BBQ! That BBQ is on top of my list of the most succulent kebabs I ever had in my entire life taking into consideration that I do come from a Kebab devoted nation! We got there, we ate the delicious kebab, we put up the tents, slept and got up early in the morning to reverence the sunrise. Then we had a walk around the Tila Jogian temples, one of the most relevant Sikh temples, set tastefully upon the only mountain in the area. It was time to head down and ride back. Once on the road we were commenting that if we had known that it was so far and so tough to get there, we would have not continued riding. I´m glad we were optimistic and naïve. Maybe this is the way one should go through life, the Pakistani way!